Facebook says it removed more than 300 accounts, pages and groups last month after catching operators misrepresenting themselves in a number of ways.

It’s the latest in a series of monthly updates from Facebook clarifying the different ways that governments, marketing firms and individual users game the website to try to make money or influence public opinion. Most recently, the company disclosed that Russia’s Internet Research Agency, which U.S. intelligence officials say was dedicated to amplifying divisive social media activity ahead of the 2016 election, had outsourced some of its work to users in Africa.

In this case, the company says it found a network of 51 accounts, nine pages and nine Instagram accounts linked to the Sète region of France. The accounts weighed in on municipal elections, criticizing some candidates while praising others, discussing contentious topics like immigration. In at least one case, an account was masquerading as a Politico bureau. 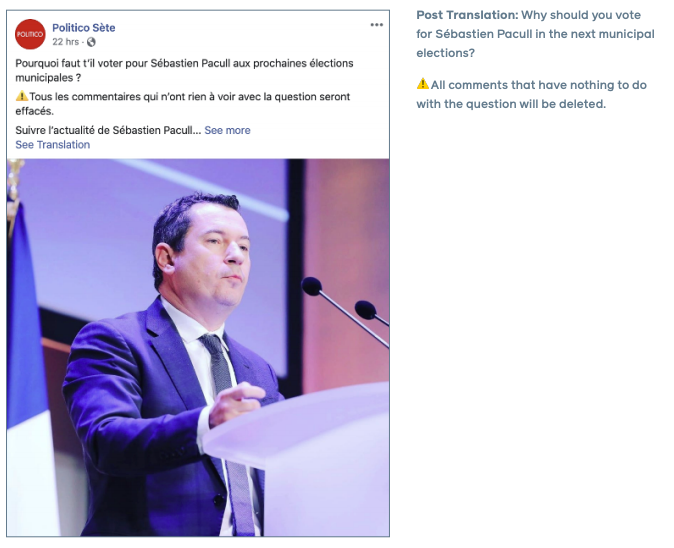 Some 6,000 accounts followed one or more of the French pages.

Facebook also uncovered 81 accounts, 82 pages, one group and 76 Instagram accounts involved in foreign interference. This activity originated in Egypt, and posted on topics such as regional news, the coronavirus and the civil wars in Yemen and Libya. The campaign reflected the leadership of Egypt, Saudi Arabia and the United Arab Emirates in a positive light, while being more critical about governments in Iran, Turkey and Qatar.

Facebook linked this campaign to a marketing company, Maat, based in Egypt. Roughly 1.45 million accounts followed one or more of the Pages, the company said.

The announcement Thursday coincided with news from Twitter that it removed numerous campaigns involving accounts from Saudi Arabia, Egypt, Honduras, Indonesia and Serbia. The 20,348 accounts included in Twitter’s takedown appeared to be taking direction from the relevant governments, or working to amplify articles from suspicious news sites.

It also highlighted how social media campaigns are not limited to one platform. Nathaniel Gleicher, head of cybersecurity policy at Facebook, said that Facebook had removed networks associated with some of the same groups identified by Twitter. Facebook previously removed activity apparently from Serbia for violating its spam policies, Gleicher added.