Hackers claimed to have breached HBO computer networks have leaked personal financial information and passwords belonging to company employees, as well as what appears to be unreleased television scripts and episodes.

The hackers posted leaked data to “winter-leaks.com” on Tuesday, but by Wednesday had been taken offline. The HBO hack haul is 1.5 terabytes, the hackers say, seven times the 200 gigabytes of the Sony hack. There is no independent confirmation for these numbers, yet multiple files posted for download were above 100 GB in size.

The unidentified hackers promise more is coming, including emails, databases and “precious stuff that blaze your eyes,” according to an email sent to reporters preceding the leak.  The hackers also offered rewards to reporters who pleased them: “You are lucky to be the first pioneers to witness and download the leak,” the hackers wrote. “Enjoy it & spread the words. Whoever spreads well, we will have an interview with him.” 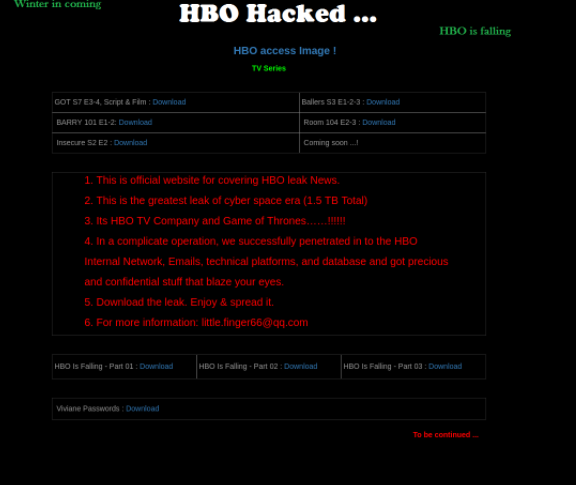 HBO CEO Richard Plepler told employees in a company email that internal email systems were not affected, according to Variety.

HBO confirmed earlier this week that “proprietary information” was exposed but did not specify or respond to requests for comment.

The FBI is investigating the hack, while HBO is working with Mandiant, according to the Hollywood Reporter.

Questions remain about whether this incident is an extortion attempt, as many Hollywood companies have experienced in the last year, or if it’s an attack and leak in the vein of the 2014 attack on Sony Pictures Entertainment.

When the Sony hack made headlines, it was partly due to leaked internal emails, leading to the dismissal of company co-chair Amy Pascal. It’s also produced a chilling effect on Hollywood studios afraid of a repeat disaster.

The prevailing motive for Sony hack, however, was political in nature. The motive behind the HBO hack remains unclear at this point.