Won’t somebody besides the scammers please think of the children?

The malware, known as AdultSwine, created an array of problems for victims, including scaring them into installing fake security apps, spending money on premium SMS messages and displaying ads over other apps that included pornographic content.

Google confirmed the incident to CyberScoop and a spokesperson said the apps were removed from the Play Store, the developer’s accounts were disabled and warnings are being dispatched to anyone who installed the affected apps.

Some of the ads came from popular advertisement networks like Google, Facebook and Immobi. The pornographic ads and content comes from the malware’s own ad library.

A Google spokesperson said the infected apps don’t strictly qualify as intended for children because the malware developers didn’t participate in Designed for Families, a strictly controlled and manually reviewed program on the Google Play Store. 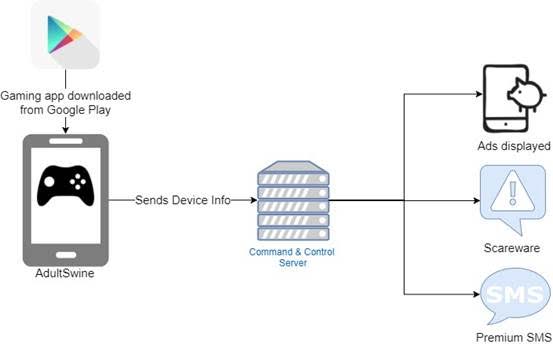 “Definitely some things slip past Google once in a while,” Christoph Hebeisen, an Android security researcher at Lookout, told CyberScoop. “That said, I suspect it’s a tiny percentage of what’s actually thrown at them by malware developers. I think it’s just the sheer mass that something once in a while slips past. In this case, there are millions of downloads but in most cases malware doesn’t get downloaded terribly often.”

Boasting the most popular mobile operating system on the planet, Android is making improvements and winning battles but is still fighting an uphill battle with no end in sight.

“Google Play houses more apps and has laxer controls for developers to get their apps into the Play store,” according to Jordan Herman, a researcher from the threat intelligence firm RiskIQ. “However, Google does work diligently to ensure that blacklisted apps are removed from the store. In fact, the percentage of apps blacklisted by RiskIQ in the Google Play store has decreased, falling to a low of 4 percent in Q3 after reaching a high of 8 percent in Q2.”

Apple’s App Store does contend with malware but, due in large part to tighter restrictions and a far smaller number of apps and users, the iOS App Store appears to be hit less frequently with malware outbreaks than its Android counterpart.