Martin allegedly stored much of this information at his home in Glen Burnie, Maryland, and in his vehicle, court documents show. He was arrested in August and has been awaiting trail in a local detention center. Last fall, a federal judge declined Martin’s request to be released from jail pending trial or a resolution of the case. At the time, the judge ruled that Martin posed a flight risk.

“The FBI investigation and this indictment reveal a broken trust from a security clearance holder,” FBI Special Agent Gordon Johnson said in a written statement. “Willfully retaining highly classified national defense information in a vulnerable setting is a violation of the security policy and the law, which weakens our national security and cannot be tolerated.”

The indictment lists numerous sensitive documents that were allegedly stolen by Martin and found at his residency, including intelligence agency manuals, briefings and other reports. FBI investigators confiscated material from Martin’s home that showed what the U.S. intelligence community knew about the hacking capabilities of foreign powers. 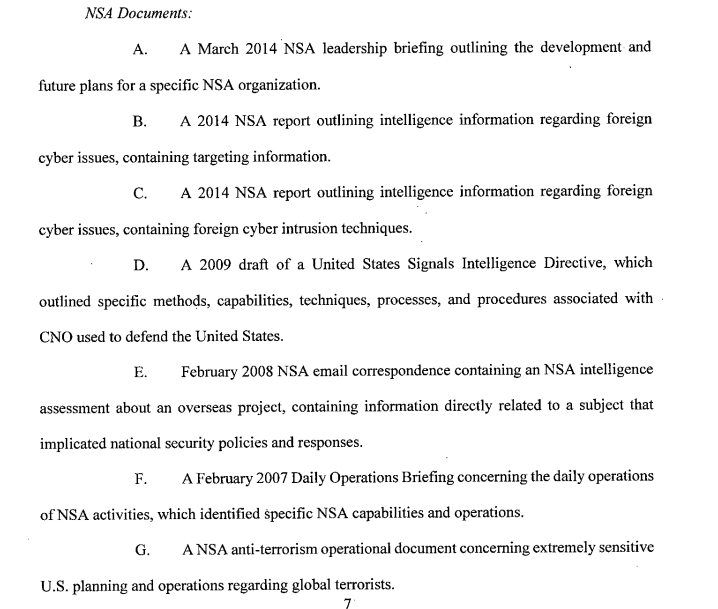 “As a private contractor who worked on classified programs at various U.S. government agencies, the defendant was entrusted with access to sensitive government materials,” Maryland Assistant Attorney General Mary McCord said in a statement, “Martin allegedly violated the trust our nation put in him by stealing and retaining classified documents and other material relating to the national defense.”

Martin, a 52-year-old former Naval officer, was employed by at least seven different private technology contractors between 1993 and 2016. He worked at multiple federal agencies, including the NSA and Office of the Director of National Intelligence, where he was required and trained to hold security clearances up to Top Secret and Sensitive Compartmented Information.

The Washington Post, citing an unnamed U.S. official, previously reported that Martin had compromised more than 75 percent of the tools stored in a secretive library used by the agency’s elite hacking unit known as Tailored Access Operations, or TAO.

If convicted, Martin faces a maximum sentence of 10 years in prison for each of the 20 counts of willful retention of national defense information. He will appear in court next on February 24.