At a Senate Intelligence Committee hearing Thursday morning, Ted Cruz, R-Texas, asked top American intelligence officials if any of them would use Kaspersky products, which are found on computers throughout the U.S., including those of major businesses.

“A resounding no from me,” Director of National Intelligence Daniel Coats testified. Every one of the witnesses, including acting FBI Director Andrew McCabe and Adm. Mike Rogers, who runs the NSA and U.S. Cyber Command, agreed. Earlier this week, several outlets had reported increasing concerns about American officials that Russian spies could use Kaspersky Lab’s software or personnel against American interests.

Kaspersky himself hosted a question-and-answer session on Reddit’s /r/IAmA forum Thursday, and all of the top questions addressed the American fear of Russian government influence on the cybersecurity company.

“No, it doesn’t and any speculation about it are false, they are unfounded conspiracy theories,” Kaspersky wrote.

Kaspersky blamed “political reasons” for the criticism and said he would be “very happy to testify in front of the Senate, to participate in the hearings and to answer any questions they would decide to ask me.”

Kaspersky Lab has publicly reported on alleged Russian cyber espionage campaigns including Red October, a 2013 campaign spying on diplomats in Eastern Europe. The company also has reported on U.S. cyber-espionage including Stuxnet, the NSA’s 2009 hacking campaign against Iranian nuclear facility.

“We do not care who’s behind the cybercampaigns we expose,” Kaspersky said in 2015. “There is cyber-evil, and we fight it.”

The Intelligence Committee sent a secret memorandum last month to Director of National Intelligence Dan Coats and Attorney General Jeff Sessions expressing concerns about Kaspersky Lab. Although the existence of the memorandum has been publicly reported, no evidence of wrongdoing by Kaspersky Lab employees or undue influence by the Russian government has been shared at this point.

While the Senate held its hearing, Kaspersky was asked on Reddit if being Russian made it harder to gain trust in the West.

“Yes and no,” Kaspersky said. “Sometimes people are suspicious because of all the hype about Russia and Russians, that makes our lives harder. And having a lot of research in Russia helps us seeing a lot of new threats in Russia first on the market. And this definitely helps us working on our products and services and winning trust of our customers.”

American suspicions about Kaspersky are years-old, as evidenced by a 2012 Wired article and a 2015 Bloomberg article raising many of the same points.

Kaspersky, born and raised in the Soviet Union, learned cybersecurity at a school sponsored by the Russian military and KGB and served in the armed services as a software engineer. But it’s not just his past that is being criticized, it’s the closeness that he and his employees allegedly still harbor with the FSB, effectively the KGB’s successor, which is a lightning rod for Western criticism.

Multiple American media outlets have reported that Kaspersky has also turned down American intelligence attempts to turn him into an asset for the U.S., another move that stoked annoyance from Washington.

On Tuesday, Kaspersky Lab released a public denial of the criticism, stating they have “no ties to any government, and the company has never helped, nor will help, any government in the world with its cyberespionage efforts.” The full text: 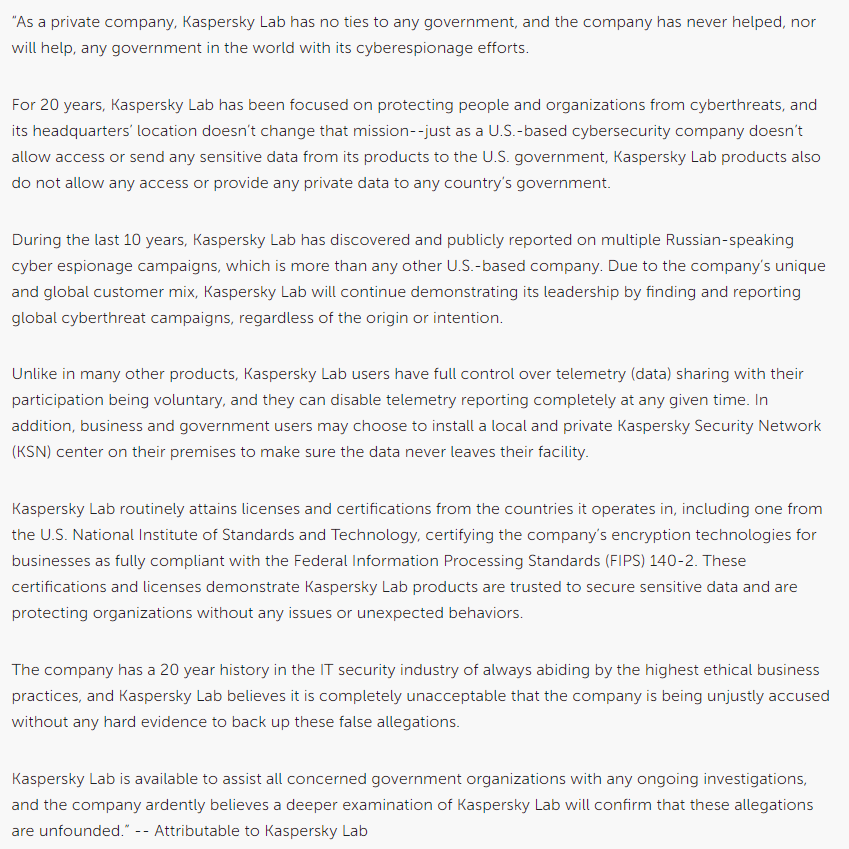