The large amount of leaked patient records stolen and posted for sale to the dark web in recent months has caused prices for most of those records to drop, according to new research provided to CyberScoop and conducted by the Institute for Critical Infrastructure Technology and cybersecurity firms Flashpoint and Intel Security.

In the face of exceeding supply, stagnant demand and increased law enforcement attention, it’s becoming increasingly difficult for criminals to make a living selling partial healthcare records, according to James Scott, a senior fellow at ICIT.

While the quality, quantity and sometimes origin of such electronic records will help dictate the price of any specific package for sale, average prices are largely trending downwards for individual, non-financial files, new research shows. The value of similar healthcare records that sold last year for roughly $75 to $100 dollars can now be found for around $20 to $50 dollars, Scott said.

“The volume of medical data for sale in the criminal underground is increasing, leading to very low prices for individual records,” Vitali Kremez, a senior analyst focused on cyber intelligence at Flashpoint, told CyberScoop.

A majority of stolen healthcare patient records sold on the dark web come from U.S.-based institutions that have been breached, according to Intel Security. 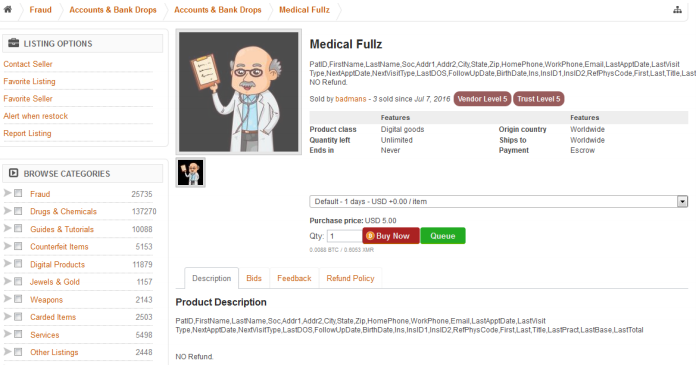 In broad strokes, an electronic healthcare record is rarely worth very much unless it is converted into a “complete ID kit,” which combines long form healthcare records, additional documents and are authorized via a breached government registration database, explained Scott.

Dixon told Healthcare IT News that decreasing prices are a general conclusion of easier access to sensitive personal records. One component of this eased access, based upon data gathered by ICIT and Intel Security, is the growing sale of hacking-as-a-service on the dark web — which enables those without technical backgrounds to hack into systems by relying on paid mercenaries.

Laying the groundwork for a further discordant dark web economy in some part, according to Kremez and Intel Security vice president Raj Samani, is also the ambiguous rise of prominent, dedicated healthcare hackers. Two of these mysterious actors, known simply by their vendor usernames “earthbound11” and “thedarkoverlord,” have been flooding the market with medical fullz in recent months, thereby dictating the price for other smaller resellers.

A hacker’s underground reputation is typically one of the leading factors leading to the valuation and eventual sale of any records package they post, research shows.

“The larger trend in the trade of compromised personal healthcare information is toward larger breaches affecting more data,” said Kremez, “cybercriminals themselves have realized that the value of their stolen medical data is much lower than once expected.”

Though it remains unclear how a recent fall in Dark Web prices have and now continue to influence hackers’ attack behavior towards the healthcare industry, several experts who spoke with CyberScoop believe it will ultimately lead to a spike in overall network intrusions at hospitals — the counterintuitive thinking here being that larger data dumps will help dark web vendors recoup recent profit losses.

“After the 2015 breach of 100 million medical records from Anthem, Premera Blue Cross, and Excellus Health Plan, let alone the numerous smaller networks compromised in 2015 and 2016, the annual rate of medical identity theft could easily increase to be ten or twenty times greater than the 2014 rate,” an extensive, recent Dark Web report from ICIT reads.

Unlike stolen credit card details and other payment information sold online, however, a cloud of uncertainty looms over leaked healthcare records because cause and effect is difficult to decipher, said Samani. According to an April 2014 FBI bulletin, electronic healthcare record theft is also more difficult to detect, taking almost twice as long to spot as normal identity theft.

In most cases, the data necessary to draw a conclusive connection between a leaked patient record and relevant case of identity fraud, for example, is neither readily available nor visible The result is an environment where targeted data breaches occur but security researchers cannot definitely say how some, if not most, of the leaked information is being used, explained Samani.