Like many forms of online crime, scam artists have turned fake news into a purchasable service on the web, promising to viralize content, no matter how distorted or untrue, spread it on the Internet and promote it through social media.

Researchers from Trend Micro catalogued the services on offer in Chinese-, Russian- and English-language dark-web cybercrime forums and online “gray” markets, where they are offered alongside “black hat” Search Engine Optimization tools; services that promise to generate social media followers; and offers to generate comment spam, fake upvotes or other kinds of fraudulent Internet engagement.

The report doesn’t address how effective these tools and services are; nor does it analyze any actual examples of their use. All the scenarios it discusses — discrediting a journalist or sparking a street protest — are hypothetical. But there was a reminder this week that the phenomenon is all too real with the arrest of three Chinese men in Thailand. According to the Bangkok Times, police, who seized nearly 500 iPhones and over 400,000 simcards, believe the men were operating an illegal business generating “fake page views, likes and shares” on WeChat, the Chinese  social media platform.

The Thai arrests are a real-world example of the “wide variety of tools and services … readily available, both inside and outside the underground scene” the report finds available to rent or buy.

“Some are relatively simple (paid likes/followers, etc.), while some are more unusual — some services promise to stuff online polls, while some [say they will] force site owners to take down stories,” the report reads.

The researchers found that many of those selling these social media promotion services had recently moved on from click-fraud advertising scams after that became unprofitable due to technical advances in the online advertising ecosystem.

For businesses, the authors write, the issue is a serious one because “whether information is true or not sadly doesn’t matter,” when it comes to impacting public opinion or an individual’s or institution’s reputation

The reconnaissance stage involves analyzing the target audience. Weaponization is the preparation of the fake news story. Delivery is where the services described in the report come in; and exploitation involves seeding sympathetic audiences ahead of the main campaign for persistence, when the stories need to take on viral character and begin to spread of their own accord.

“While any media post can be considered biased to some extent,” write Trend Micro researchers Lion Gu, Vladimir Kropotov and Fyodor Yarochkin, “what differentiates fake news campaigns is that they are often generally based on fabricated, non-existent facts and often utilize shocking, clickbait titles in order to attract the reader’s attention” and manipulate their opinions.

The headlines “cannot be emphasized enough,” the authors state. “In today’s digital era, the attention span of a typical reader is very short. Fake news creators use this to manipulate the public. There’s no need for an article to be sensible, complete, or factual; a sensational headline will achieve the objectives just as well.”

They identify three elements of what they call the “fake news triangle” — a combination of motivation; effective platforms in the form of social media networks; and promotional tools and services such as the ones they catalogue. 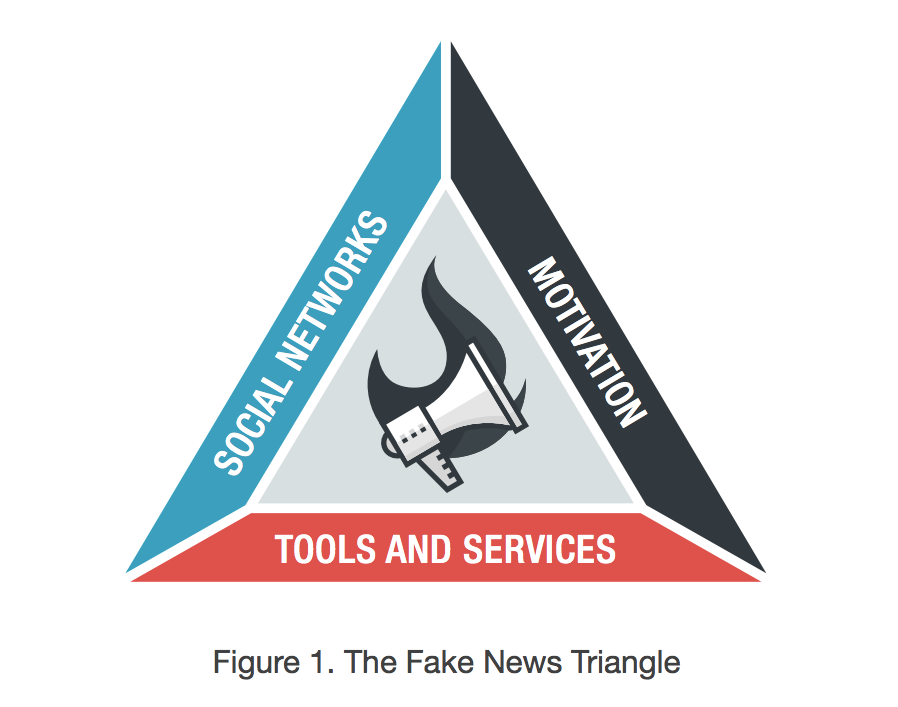 “Similar to the fire triangle, fake news requires all three factors to be present in order to be successful. The absence of any one of the three factors will make the spread of fake news more difficult, if not impossible,” the authors state. It’s not clear, however, if there are any policy options available to governments that would remove one of the three elements.

The authors point out that the fake news campaigns seen in real life have been political in nature. But, “the tools and techniques that enable them are becoming more available. It is inevitable that other motivations — such as profit — will come to the forefront in later years.”