The Justice Department should issue guidance about what kinds of “active defense” measures are permissible under U.S. law and the Homeland Security Department should develop procedures for working with private sector companies that want to implement them, a report from a blue ribbon panel said Monday.

Companies experiencing cyberattacks are currently often hamstrung by a lack of clarity from U.S. federal authorities on the legality of active defense measures, states the report from George Washington University’s Center for Cyber and Homeland Security.

Active defense measures are defined as ones that fall between merely passive defense techniques like firewalls and scans at one end of the spectrum, and “hacking back” attacks like seizing control of an adversary’s server at the other end.

Active defense measures “may cross the threshold of the actor’s own network borders, and produce effects on the network of another … [impacting] the confidentiality, integrity, or accessibility of another party’s data,” states the report, produced by a 30-strong task force co-chaired by Adm. Dennis Blair, former director of national intelligence and chairman and CEO of Sasakawa Peace Foundation USA; Michael Chertoff, former secretary of Homeland Security and executive chairman and co-founder of The Chertoff Group; Nuala O’Connor, president and CEO of the Center for Democracy and Technology; and Frank Cilluffo, director of the center.

The report, its authors say, is an effort to provide a framework to help policy makers think about the legal “gray zone” of active defense measures and decide which are safe for routine use, which should only be employed sparingly and which should perhaps be ruled out, or at least only taken in close cooperation with government authorities. 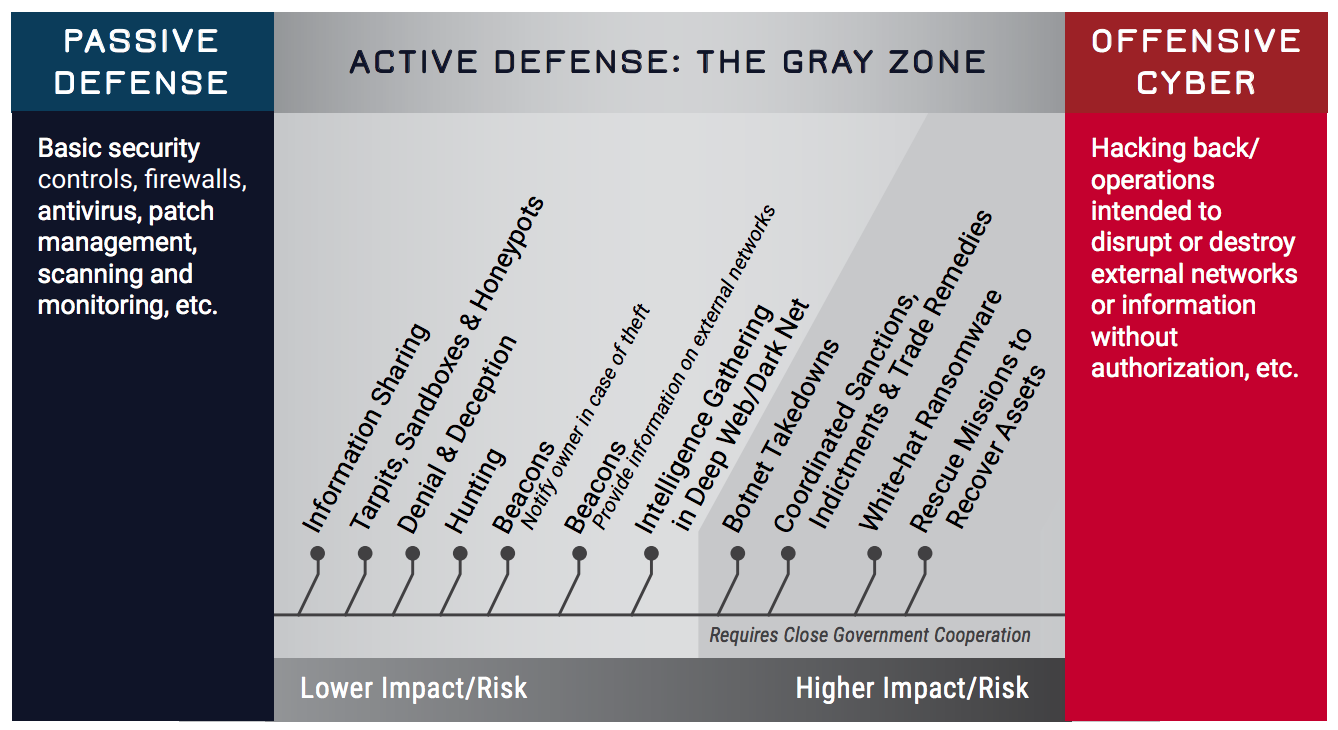 The authors insist that hacking back is very different from active defense and that the two terms “should not used interchangeably.”

But they acknowledge that the characterization of active defense as distinct from offense “depends upon the intent or objective of the actor implementing them. Activities aimed at securing one’s own systems, or preserving operational freedom could be characterized as defensive in nature,” even if they intrude upon another party’s networks. “Disrupting a malicious botnet, sinkholing traffic from a malicious IP address, and other activities that are taken in direct response to an ongoing threat would fall within this category,” the authors argue.

The problem, they add, is that the legal test which makes a computer intrusion a crime under the federal anti-hacking law known as the Computer Fraud and Abuse Act, is whether or not the access is “authorized.”

Because attackers are very unlikely to authorize access to their networks, the report states, “U.S. law is commonly understood to prohibit active defense measures that occur outside the victim’s own network.” An exception is when a victim company or its contractors can get permission from a third party whose network — having been hacked by the attackers — was used as a staging ground or launchpad for their operation.

In order from least risky to most risky, the report lists and defines active defense measures as follows:

The report also recommends that the State Department reach out to U.S. allies and work with them on “developing common standards and procedures for active defense measures,” especially because most large companies targeted by hackers operate globally, “and thus need to protect information on systems in dozens of countries.”

In addition, the Privacy and Civil Liberties Oversight Board “should carry out a review of current and proposed federal government activities related to active defense activities by the private sector, and release a public report on the results.”

Congress should “reassess language in the CFAA and the Cybersecurity Act of 2015 that constrains private sector activity on active defense, to ensure that low and medium-risk active defense measures are not directly prohibited in statute,” the authors urge.

Finally, they recommend that both Congress and the White House should enshrine the presumptive legality of active defense in law and policy.