Staying ahead of malicious actors is challenging, but organizations can take advantage of advanced threat intelligence through partnerships the Department of Homeland Security created with accredited communications service providers. 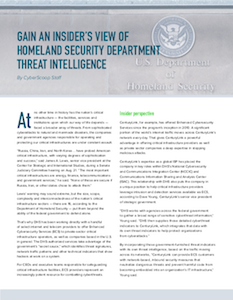 The special report, produced by CyberScoop and underwritten by CenturyLink, highlights how the DHS-ECS partnership can provide top executives in industry and government powerful insights gleaned from active monitoring both by DHS and global network carriers like CenturyLink.

A global communications provider like CenturyLink monitors about 114 billion NetFlow sessions and 1.3 billion security events per day, the report says. By combining real-time insights from that volume of network activity with DHS’s cyberthreat intelligence, ECS providers are able to give industry and public sector leaders an edge on how hackers may be at work on their systems.

Some industries are more at risk than others, especially as it relates to the nation’s 16 critical infrastructure sectors identified by DHS. The size, scope, complexity and interconnectedness of these sectors put them beyond the ability of the federal government to defend alone — which is why this ECS partnership is so important, the report said.

“They can’t get that information directly from DHS,” he explained. “They can only get it through a communications service provider. And you have to be an ECS provider authorized by DHS.”

With an increase in the sophistication of cyberattacks, and malicious actors sponsored by nation-states, heightened visibility enables IT executives to better anticipate and protect against these threats.

This article was produced by CyberScoop and underwritten by CenturyLink.